As the original form of social media,

for local residents to create their very own non-commercial local cable TV programs.

over 4,900 new local tv programs for and about Dayton.

Our mission is to serve as a community forum that empowers all citizens to learn, create, and express their ideas through electronic media.

DATV provides various
workshops that teach you how to produce your own
local cable TV programs. Join DATV today and start your journey to creating your very own non-commercial cable TV programs, web programs, and podcasts.

DATV is a nonprofit 501(c)(3) organization that, since 1978, has given Dayton the “Freedom to Communicate.”

Giving Dayton the “Freedom To Communicate” since 1978

In 1978 Americans were going to the movies to see John Travolta and Olivia Newton-John in “Grease.” A peanut farmer from Plains, Georgia named Jimmy Carter was the President. And future NBA star Kobe Bryant was born.

Another significant day that year was March 1st, 1978, when DATV, then Access-30-Dayton, began cablecasting on Viacom cable in the City of Dayton. At that time cable television was in its infancy and many different types of programming ideas were beginning to form. It was not even until the next year on September 7th, 1979 that another network with the then crazy idea of 24 hour sports programming named ESPN was born.

Access television would be unique, not meant to compete directly with commercial television, but to serve as a community forum and public gathering place on TV where views could be expressed, ideas exchanged and local information communicated to viewers.

The idea of “Access” television in Dayton began  in 1977.  When Roxie Cole had the foresight and a grant from the Ohio Board of Regent to help create DATV (Dayton Access Television). The staff consisted of one, Cole, and the budget was $39,000 in cash and $50,000 worth of television equipment.
Compared to commercial television the funding was small, but it was a start.  And on March 1,1978, operating from one room in the basement of Roberts Hall at the United Theological Seminary, DATV, went live into cable TV homes around Dayton.

The birth of a strong tradition of public access in the city of Dayton began in 1977.  Roxie Cole had the foresight and with a grant from the Ohio Board of Regents, DATV (Dayton Access Television) was created. The staff consisted of one, Cole.

The budget was $39,000 in cash and the inventory was $50,000 worth of black and white television equipment. It was a start and on March 1,1978, operating from one room in the basement of Roberts Hall at the United Theological Seminary, DATV, which at that time was called Access 30 Dayton, went “on-the-air.” 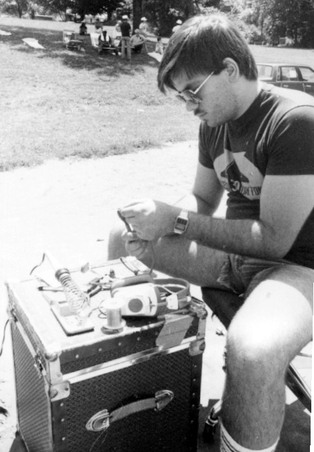 Two strong forces served as catalysts for the growth of public access television in Dayton. One was Roxie Cole.  Cole became Executive Director and managed the organization for the next thirteen years.  The second force was a nine-member Board of Trustees.

This board was chosen from a cross section of citizens living in the city. It was their vision and community commitment that helped Cole develop policies, procedures and the encouragement needed in order to form the basis of an award winning public access television station. On April 4, 1979, Dayton Public Access Television, Inc. (dba DATV) was incorporated as a nonprofit, 501© (3) organization in the State of Ohio. For approximately six years the building known as the “White House” on the grounds of the Seminary was home to public access. In 1983 DATV moved into the rear of the Viacom Cable building at 275 Leo Street. 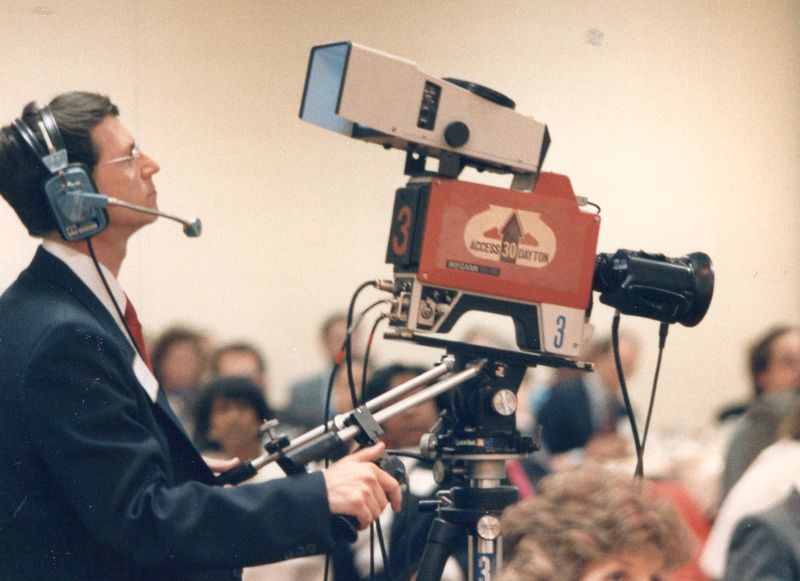 The name change coincides with its channel relocation to channel 20 from its previous location channel 30. 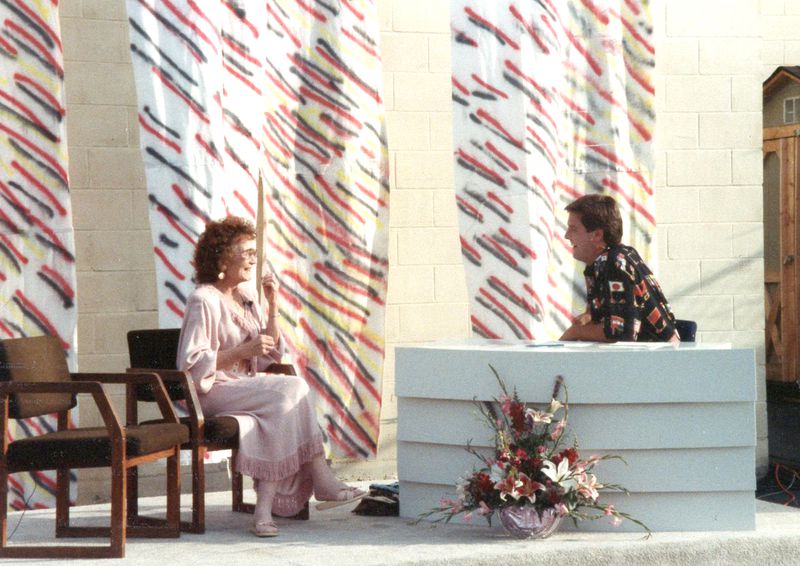 After fifteen years of using other people’s facilities, DATV purchased their own building at 280 Leo Street, directly across from the cable building.  On Monday, September 14, 1992, at 3 PM DATV volunteer Clarence Hogan aired the first show, Dayton Black Unity Performers from that facility.

The white building, with blue lettering, is a renovated 10,000 square foot building. It has a 40X50 studio, four edit suites, internet kiosk, volunteer lounge, conference room, administration offices and a training room. The total price tag for this state of the art television facility geared toward the Dayton community was nearly $700,000. But when it was completed, it gave the citizens of Dayton the Freedom to Communicate by becoming volunteer/producers and creating their own non-commercial television programs.

The inventory has grown from black and white cameras to top of the line digital cameras.   Producers now have the capability to edit from digital to SVHS, do A/B rolls, use an Avid non-linear edit system or the Trinity editing system which includes the titling software, Titlewave. The second Wednesday of each month free orientations are given to any local citizen who desires to become a volunteer/producer at DATV.

DATV has advanced to seven full time staff members and six part time employees whereas Access 30 had only one. The nine member Board of Trustees has been expanded to eleven members who represents a broad spectrum of the Dayton community. And DATV has moved from Channel 30 to Channel 20. DATV becomes the first local TV station to have its own website when it debuts www.datv.org. 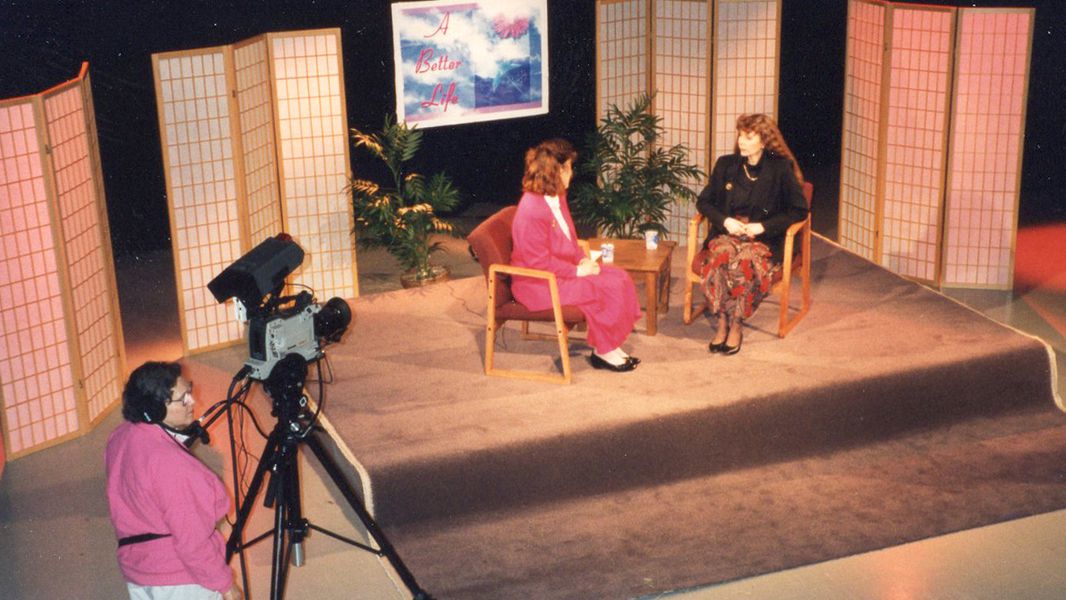 DATV becomes nationally recognized by awards won by the staff and by their involvement in the regional and national Alliance for Community Media.  In 1995, DATV hosted the Alliance for Community Media’s Regional Conference and Philo T. Farnsworth Video Awards held at the Dayton Marriott Hotel.  Public, Educational and Government (PEG) access channels staff, producers and volunteers from Ohio, Indiana, Michigan and Kentucky participated in a three day conference.

In April of 1998 DATV Executive Director Francine Rakel resigned after 7 years. During her tenure DATV saw the opening of its Community Media Center, was named a finalist for the Community Communications Awards for Public Access, launched its web site in 1995, and was named recipient of the Alliance For Community Media’s highest programming honor which is the Hometown Award for Overall Excellence in Public Access Programming. During 1997 the programming seen on DATV was judged to be the best in the nation in the large access center category and was honored by the Alliance for Community with the Hometown Video Festival Award for Overall Excellence in Public Access Programming.

In 2003 DATV celebrated its 25th Anniversary of “Giving Dayton The Freedom To Communicate”.  As part of this celebration DATV buried a time capsule that is set to be opened on March 1st, 2078 in honor of DATV’s 100th Anniversary. DATV Executive Director John Rocco resigned his position effective February 3rd 2006. John was offered the unique opportunity to help build the future of Public Access Television in the City of Charlotte North Carolina at the Charlotte Mecklenburg Public Access Corporation. During his tenure at DATV, both DATV and the City of Dayton have been recognized nationally for their outstanding work in the field of Public Access Television. Dayton serves as a model of citizen participation and it is this type of community involvement that many cities hope to emulate. DATV’s Board of Trustees announced the selection of DATV’s new Executive Director. After a nation wide search, Rick Hayes was chosen to lead DATV beginning on July 1st.

Hayes is no stranger to Dayton or DATV. He served as DATV’s (then Access-30-Dayton) Operations Manager from 1986 until 1987 under DATV’s founding Executive Director Roxie Cole. Hayes was only the fourth Executive Director in DATV’s 28 year history. He replaced John Rocco who left DATV in January to become Executive Director of the Charlotte Mecklenburg Public Access Corporation in Charlotte, North Carolina. DATV holds its first ever Telethon. The program features dozens of local acts and celebrities who volunteered their time to help raise money to support DATV. Ross will be the 5th Executive Director in the thirty year history of DATV. He was originally hired by DATV’s founder and first Executive Director Roxie Cole. “Roxie taught me what a tremendous impact that Public Access television can have in the community,” said Ross. “Her love and passion for DATV still lives on in the hearts of our nearly 500 members.”

DATV signs a new 10 year contract with the City of Dayton to provide community media services.

DATV expanded its programming reach into Dayton’s northern suburbs on Time Warner Cable  on Tuesday, June 10th. DATV will be filling the void left by the closing of CAC which was previously operated by Time Warner in the northern viewing area. KEEP DATV AS THE DIGITAL FABRIC OF THE COMMUNITY.

There is a current movement to rewrite the requisite title of federal law governing video services. In effect, this change would take away local power, control of property and rights of way, and local voices.  The actions of the FCC would negatively impact DATV and take away the freedom to communicate for local members, governments, non-profit organizations, and other strong community voices.

We ask that you support the efforts of DATV and other affiliates around the county; and write to your US Representative, telling them that you do not support these changes.

DATV made available a letter you can print and mail (or email) which includes all the information you’ll need. Steve is a 1982 graduate of Fairmont State College in Fairmont, WV. After graduating from college, Steve was hired by WKEF-TV Ch. 22 in Dayton as a Production Assistant. In 1984, Steve was promoted to Director and began directing news, commercials, promos, and various public informational programming for WKEF.

In 1989, Steve left WKEF to take over the reins of Operations Manager of DATV (then Access 30 Dayton.) In his 19 years with DATV, Steve has seen many changes in Dayton’s public access facility. With a new building in 1992 and nearly 10,000 square feet, DATV has become more vital to the community and to the mission of public access television in Dayton.

Steve became Executive Director in August of 2008. In 2018 Steve returned to his previous position of Operations Manager. Melissa was hired at DATV, June 12th, 1984 as the receptionist.  Since then she has advanced to the position of Program Director beginning in 1994.

Melissa was very active in the Alliance for Community Media, she served from 1997-2004 as the Grassroots Chair of the Central States Region.  As chair, she was responsible for raising money to help send people to Regional and National Conferences.

From 2001-2004 Melissa became the Vice Chair of the Central States Region of the Alliance for Community Media and the Ohio/Kentucky Chapter of the region.

She was elected to the National Board of the Alliance for Community Media for a 2 year term from 2002-2004.

Melissa has produced various programs at DATV, including The Dayton Ambassadors In Concert, Here at Home and Hot Country Video Hits.  You can also see her on DATV as host of the 1999 Children’s Parade, the 1999 Southeast Dayton Days Parade and the 2000 & 2001 Children’s Parade.

In 2001, Melissa received a Hometown USA Video Award for her program A Road of Memories: The Life And Times of Roxie Cole, which she produced with Rick Latimer of DATV.

Has produced the Dayton Air Show since 2010, Won Roxie Cole Leadership Award in 2014 from the Central States Region of the Alliance for Community Media. Dale started as a volunteer producer for Dayton Access Television in 1995. He was hired on as a full time Production Assistant a couple of years later.  Dale has worked in a freelance capacity for ESPN, The Nashville Network and Fox Sports Ohio. Eric began working at MVCC in 2006 and was a summer staff member for three years afterward. Since then Eric has worked as an independent filmmaker with work consisting of music videos, commercials, freelance editing and short films along with more projects on the horizon.  Eric is also a writer for the heavy metal website Metalmasterkingdom.com

Our Board of Trustees

“DATV is a community forum that empowers all citizens to learn,create and express their ideas through electronic media.”

*Affiliations are for identification purposes only. All Board members must be residents of the City of Dayton.

(DATV’s Trustees are appointed for three year terms. Membership is by application to, and approval of, the trustees in accordance with DATV’s Constitution.)